Until Tuesday: A Wounded Warrior and the Golden Retriever Who Saved Him 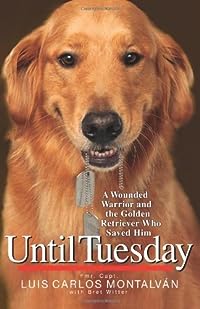 A highly decorated captain in the U.S. Army, Luis Montalván never backed down from a challenge during his two tours of duty in Iraq. After returning home from combat, however, his physical wounds and crippling post-traumatic stress disorder began to take their toll. He wondered if he would ever recover.

Then Luis met Tuesday, a sensitive golden retriever trained to assist the disabled. Tuesday had lived among prisoners and at a home for troubled boys, and he found it difficult to trust in or connect with a human being--until Luis.

Until Tuesday is the story of how two wounded warriors, who had given so much and suffered the consequences, found salvation in each other. It is a story about war and peace, injury and recovery, psychological wounds and spiritual restoration. But more than that, it is a story about the love between a man and dog, and how, together, they healed each other's souls.